“Campbell’s craftsmanship focuses on a return to traditional songwriting values. He has an innocent belief that good lyrics with simple melodies can move mountains. After listening, so will you.” – Eric Alper, music blogger and publicist, host of @ThatEricAlper on SiriusXM

Brian Campbell is a Montreal song-poet, dexterous fingerstylist, and impassioned, heartfelt singer. He has recorded two full length albums and an EP. While his songwriting influences include such English language stars as Paul Simon and Bob Dylan, Brian is uniquely influenced by artists of the ’70s and ’80s Latin American nueva canción (new song) movement, including Victor Jara and Pablo Milanés. A widely published poet, Campbell has several critically acclaimed collections to his name. On stage he is relaxed and natural, an entertaining storyteller who spellbinds with his songs.

Montreal poet and songwriter Brian Campbell discovered his passion for making music while doing a Spanish immersion course in Antigua, Guatemala. There, a fellow student taught him a fingerstyle piece on classical guitar, which he practiced for hours after classes. Back home he perfected his guitar playing through private lessons and audio courses by such acoustic stylists as John Renbourn and Dave Van Ronk. He also befriended a Guatemalan woman, an aficionado of the Latin American nueva canción (new song) movement of the ’70s and ’80s, which included such singer-songwriters as Victor Jara, Violeta Parra, and Pablo Milanés. Transcribing and translating their poetic songs, Brian absorbed essentials of songwriting craft. Poems put to music are especially significant in the Latin American folk tradition; it is not surprising that Campbell’s first songs were adaptations of poems he translated from Spanish into English.

Shortly after moving to Montreal from his native Toronto in 1990, Campbell found his true songwriting voice. Over one summer, on a high, wrought-iron balcony with a view of a cathedral dome, he composed 27 songs — songs lyrical and plainspoken, moody and satirical, of love, breakup, and angst, as well as Sufi poems put to music. The Imaginary Album came out on cassette in 1996; The Courtier’s Manuscript was released on CD a few years later. One song from that second album, “To My Whimsical Love,” earned a certificate of achievement in the International Unisong Competition. Brian would support himself teaching English as a second language, while continuing to write songs and becoming a widely published poet with several critically acclaimed collections to his name.

In the mid-2010s Campbell came upon the Mariposa Café, a cozy, one-of-a-kind musical haven in Montreal. There he has been a featured performer at numerous Saturday evening concerts. Accompanied by other musicians, he has packed the house with enthusiastic audiences. On stage he is relaxed and natural, an entertaining storyteller who spellbinds with his songs. Campbell has played at many other Quebec folk venues, including Side Door Coffee House, the NDG and Hudson Porchfests, and Acoustic Village. Encouraged by fans, Campbell recorded a fresh EP, On This Shore, whose launch was postponed due to COVID-19, but whose reception has been enthusiastic. Songs from On This Shore have gotten airplay not only on local campus and community radio, but such renowned Canadian folk programs as Just Us Folk hosted by Jan Vanderhorst, Freewheeling Folk Show hosted by Jim Marino, and Folk Roots Radio hosted by Jan Hall.

During the pandemic Campbell has been writing and doing videos and online shows. He has also been in studio, recording single after single. Out of these, he has compiled a full-length album of a dozen songs called By The River's Blue, launched in September, 2022, to a sold-out Mariposa Café. The show was videotaped and selections have been posted on YouTube and on this site. Songs from the album have gotten airplay on CKUT's New Spins Library, Mike Regenstreif's Stranger Songs and Saturday Morning, Hugh Ambrose's Folk Everything as well as the aforementioned Freewheelin' Folk Show and Just Us Folk.

Brian Campbell lives in the Mile End area of Montreal with his wife, the writer and artist Jocelyne Dubois.

For some of Brian's photography, please check out his 500px site. 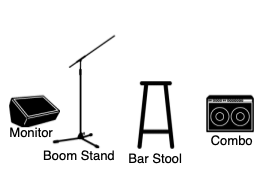 Brian’s stage plot is that a solo singer-songwriter guitarist, although  accompaniment (bass, back vocal, violinist, harmonica player, second guitarist) would of course require a more complex arrangement.  A floor monitor is a lovely thing to have, but optional.

All guitars are electro-acoustic. Brian electrically amplifies his ukuleles with an iRig Acoustic Stage pickup (which can be used for acoustic guitars as well).

Brian has recently acquired a

If need be, Brian can provide: